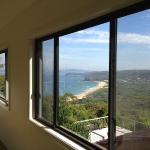 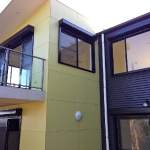 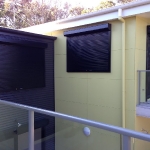 When Bernadette approached us to install roller shutters on her property, there were two important factors that had to be considered. First, Bernadette was building in an area deemed as BAL FZ, her property backed onto a steep hill which had very dense bushland. Gosford city council requirements state that she must have bushfire roller shutters rated to BAL 40.

Second, as this was a new property build, and Bernadette was concluding the project, she had a limited budget. Which is normal for a project nearing completion. Therefore she wanted the most cost effective way of having bushfire roller shutters that looked great on her new property. After our initial consultation, we came up with a solution that fulfilled both of these requirements.

Bernadette decided on our manual spring bushfire shutters. This is a simple pull down and push up operation that can be done with one hand. We choose the best colour match so the fitted roller shutters matched with the black window frames. It was important they didn’t stand out against the yellow cladding. We then decided on the spring operation so we could avoid controls on the new walls inside the house.

There was one installation challenge. Because of the storm bars on the windows, we had to put some of the bushfire shutters on at angles to ensure they were not obstructed.

The project was completed on time, within budget and Bernadette was very happy with the outcome. This is what she had to say:

“We were very impressed with the caliber of work and the standard of service provided by Adshutters and would highly recommend them. They did several site visits to check measurements, location and made sure the shutters matched with the house colours. Also, the pricing was also reasonable” – Bernadette Meredith – Gosford, Central Coast